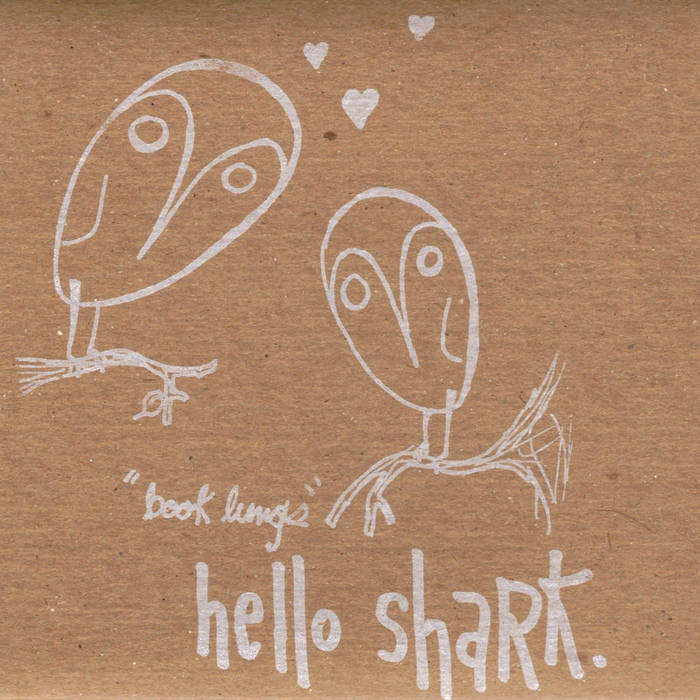 Hello Shark is comprised of Linc Halloran and assorted friends. He self-released his first album, Bumble Bees and Organ Trees, in the spring of 2006 and completed work on a new album, Book Lungs later that year. His lyrics about insects, romance, and friends are best described as quirky and endearing and are particularly disarming when placed over a backdrop of slightly out-of-tune instrumentation.

Hello Shark originally self-released Book Lungs in a pressing of 30 copies. Each of these 30 discs were contained within uniquely painted and hand-sewn cardboard CD jackets.

The second pressing of Book Lungs was screen printed and assembled at Grinding Tapes and released on 1/20/2007. The discs in this 55 copy pressing are each contained within a 100% recycled cardboard jacket featuring romantic white owls. This pressing has a misprint on the track list: “Bubble Guns” is mistakenly listed as “Book Lungs.”

The third pressing of Book Lungs was finished on 6/2/2007, just in time for Hello Shark's summer 2007 US tour with Saint Joe Hazelwood. The 80 discs in this pressing have entirely unique artwork, which features a smoking old lady, a semi-submerged face, some kind of bug, teeth, and an elderly couple dressed as marine life. Both the front and back cover are printed in dark red ink.

MF DOOM is given his flowers, plus appearances from MC Jada Imani and Stanley Ipkuss